Today’s American organizational landscape is arguable still very much a top-down model. From large corporations, to factories, to government structure and hierarchical churches, the pyramid-like shape of the bishop’s mitre first the classical management style of many organizations. Although the entrepreneurialism of the 21st century allows many to be self-employed, self-employment today often falls under a classical management style. Companies, such as Uber, allow people the freedom to work when they want to, but offer few rewards to keep morale high.

Classical management does still have a viable place in today’s organizations. Goals that require a tightly run ship, such as professional kitchens, military engagements, and volunteer efforts like those currently deployed to provide disaster relief and rescue in the wake of two major hurricanes, thrive on a strict flow-chart of top-down leadership and willing participants (employees or volunteers).

The Episcopal Church relies on a hierarchical structure that is descended from the Catholic Church. The beginnings of the Anglican Church (The Episcopal Church being a later branch-off from it) first lie in King Henry VIII’s declaring himself, instead of the Pope, the head of the Church. One ruler, in essence, was exchanged for another. Over the centuries, The Anglican Church has maintained the hierarchical structure of its origins. 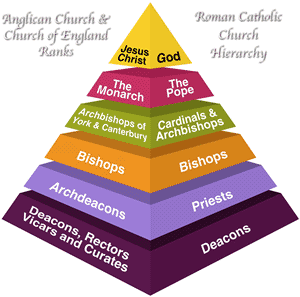 The Episcopal Church, on the other hand is set up in a somewhat democratic model. The rules that govern the Church are set up in the Episcopal Church Canons. General Convention meets every three years to make any needed changes to the Constitution or the Canons, to hold elections for office and to pass resolutions.

On the local level, the rector (head priest) heads the parish who rules in concurrence with a parish vestry.The parish is with the jurisdiction of a diocese which is supervised by an elected bishop. The General Convention is made up of representatives sent from the diocese. Priests serve under bishops and are subject to the canons (laws) of the Church, the discernment of the bishop and the local canons of the executive council of the diocese (geographic grouping) in which they are serving.

The Episcopal Church government is composed of two branches – the House of Deputies and the House of Bishops. Unlike representatives in the U.S. Government, the bishops and deputies are called to vote their according to their consciences and not necessarily according to the will of the people.

The Catholic model, from the Middle Ages, mimics the scientific management theory of Frederick Winslow Taylor in its efforts to control the behavior and actions of the people via the moral order (Eisenberg, Goodall & Tretheway, 2013, p.68). The Anglican model relies on Henri Fayol’s centralization of decision making and respect for authority, the authority being the monarch (Eisenberg, et al., 2013, p. 72). The Episcopal Church at its best embodies the best aspects of Max Weber’s (Eisenberg, et al., 2013, p.75) bureaucratic model, following set governance but embracing enchantment and mystery. At its worst, the machine is used to further the goals of those in power within a parish, a diocese or The Episcopal Church head offices. I would argue that the administrative side of offices within The Episcopal Church uses a classical management style that is in conflict with the spiritual ethos of the Church itself.

Classical management in offices within The Episcopal Church keeps the machine running in an organized way, maintains and orderly and transparent, safe house. It also has the potential to block passion, spirit, and squash the creativity of the individual wishing to achieve a calling and self-actualization within the Church. Church staff cannot be considered as less than or not needing to achieve self-actualization. Because church members in The Episcopal Church are part of the discussion of the ongoing life of the church, so should staff be. Good management within parishes assures the vitality of a congregation using a participative model of self-discovery of God’s call in one’s life.

Former Home Depot CEO Bob Nardelli revitalized the company with strict militaristic-style management. This method is not workable for Church employees. The Episcopal Church ideally balances creativity and constraint, using its legislation and canons as guard rails while allowing for the creativity and passion of its people and clergy. How can the administrative offices honor the aspects of classical management that give it structure while not ignoring the human resources and relational aspects that give it life?